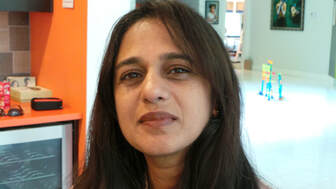 Usha Akella has authored four books of poetry, one chapbook, and scripted/produced one musical drama. Her latest poetry book is published by Sahitya Akademi, India’s highest Literary authority. In 2018 she earned an MSt. in Creative Writing from Cambridge University, UK. She read with a group of eminent South Asian Diaspora poets at the House of Lords in June 2016. Her work has been included in the Harper Collins Anthology of Indian English Poets and included in various anthologies.

She was selected as a 2015 and 2019 Creative Ambassador for the City of Austin.She has been published in numerous Literary journals, and has been invited to prestigious international poetry festivals in Slovakia, Nicaragua, Macedonia, Colombia, Slovenia, India, Trois Riviere, Romania etc. She is the founder of ‘Matwaala’ the first South Asian Diaspora Poets Festival in the US, and co-directs the festival with Pramila Venkateswaran. She has won literary prizes (Nazim Hikmet award, Open Road Review Prize and Egan Memorial Prize and earned finalist status in a few US based contests), and enjoys interviewing artists, scholars and poets for reputed magazines. She has written a few quixotic nonfiction prose pieces published in The Statesman and India Currents.

She is the founder of the Poetry Caravan in New York and Austin which takes poetry readings to the disadvantaged in women’s shelters, senior homes, and hospitals. Several hundreds of readings have reached these venues via this medium. The City of Austin proclaimed January 7th as Poetry Caravan Day.
“Poetry is a reflection of the centering self. It is the incense of our journeying, an aroma that has the power to soften all borders real and imagined.”
Usha is the founder of Matwaala and The Poetry Caravan has authored four books of poetry, one chapbook, and scripted/produced one musical drama. Her latest poetry book has just been published by Sahitya Akademi, India’s highest Literary authority. She recently earned a 2018 MSt. In Creative Writing at Cambridge University, UK. She was selected as a Creative Ambassador for the City of Austin for 2015 & 2019 and has been invited to a number of international poetry festivals.
Usha's resume: 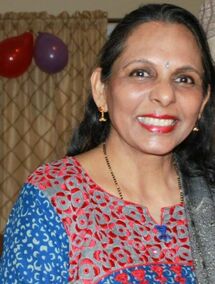 My poetics
When I write, I hear the sound of words take the magical arc of a raga. Poetry is music. When I read a poem, my ear is tuned to its music rather than the meaning. My early experience with poetry was listening to Sanskrit poems that were sung. I knew several of the classical poems by heart. I had no idea what they meant but their music stuck with me. Another early influence was my mother reading Tamil poetry to me. I heard the excitement in her voice as she narrated Ilango Adigal’s Silapatikaram, and recited Kambar’s Ramayana, Subramanya Bharati’s poems and Tirupugazh. Again, much of the meaning eluded me, but I was captivated by the sound patterns, the intricate metrics and my mother’s explication of some of the passages.
In high school and college, we memorized much of the Romantics and Shakespeare. I recall spending an entire summer end of my 9th grade year memorizing Portia’s speeches in The Merchant of Venice put up by the community theatre in Chennai. My family was proud to see me belt out those speeches on stage in my lawyer outfit!
Much of this hodge-podge of literature, folk, film, and classical songs, and a devotional tradition has seeped into my poetry.